The influence of Doc Watson

It seems like just recently that I read the sad news that Doc Watson had died. It was the end of May 2012, and I was just beginning to explore his music. Back then, I mainly played the mandolin and the concertina but I also played some simple back-up guitar when I sang in church. My husband played the guitar, and a few years prior he had purchased some Doc Watson DVDs and started to learn “Deep river blues”.

In 2013 I realised that I actually played the guitar quite frequently, and I decided to buy a decent guitar and to start learning to play it “for real”. Sadly I wasn’t able to continue for long because life and work came too much in the way, and it would take another 7 years and a global pandemic until I could take the time to get started with it again.

Doc Watson is a well-known name in bluegrass, folk, country, and old-time music circles. His flatpicking style has influenced generations of guitar players and has made the guitar evolve into what it is today as a lead instrument in bluegrass music rather than just a back-up instrument. Many tunes, such as Beaumont rag or Black mountain rag, are tunes most guitar players have learned from Doc Watson. If they haven’t, then they have learned it from someone else who has learned it from Doc Watson!

So who was Doc Watson?

Arthel Lane Watson, later known as just Doc, was born in Stoney Fork, North Carolina, in 1923. He was one of six children and was born with a condition that later caused an eye infection which made him blind before he was one year old. He went to a school for the blind, but later he began to work for his father to produce lumber for the local tannery.

The area of North Carolina where Doc grew up, is described as being very rich in folk song, folklore and music. Like in many local families, music was always present in the Watson family. Doc’s mother would sing folk ballads while doing her chores and to sing her children to sleep, and his father led the singing in the local baptist church. One of Doc’s earliest memory of music was the harmony singing in church.

His first instrument was the harmonica, followed by a fretless banjo his father built for him when Doc was 11 years old. The top was made from the skin of the recently deceased family cat – it’s said that it gave a nice tone to the instrument.

In his early teens, he had the opportunity to play a guitar that his brother had borrowed from a neighbour. Doc already knew a few chords that a friend in school had showed him. When his father found out, he helped Doc get together some money to buy a guitar. That first guitar, a Stella, cost 12 dollars.

Doc learned to play mountain folk songs with his brother and another local boy, and he has said that “when the guitar came along, to me that was my first love in music.” 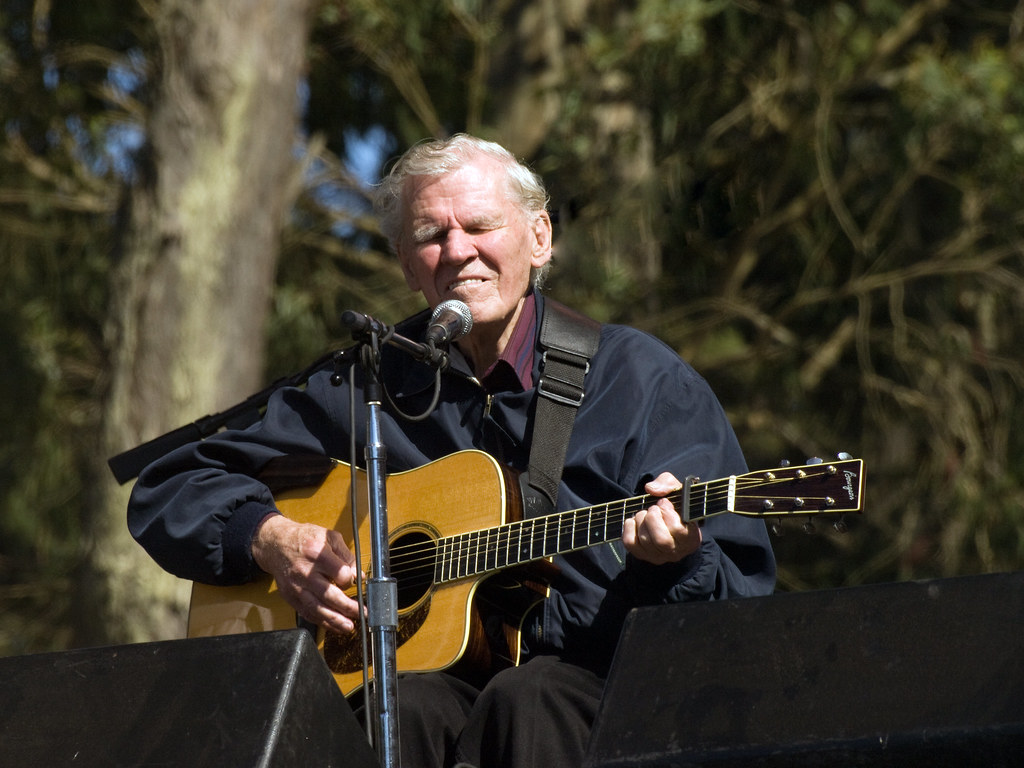 “Doc Watson” by armadilo60 is licensed under CC BY-SA 2.0

Doc’s early musical influences came from old-time country musicians such as the Carter family and Jimmie Rodgers, and with his new guitar he learned Jimmie Rodgers licks and started working on Carter family songs – but found it was much better for him to play them with a flatpick instead of using a thumb pick as Maybelle Carter did. At seventeen, Doc upgraded his guitar to a Silvertone, and around 1940 he bought a Martin D-28 that he funded by playing music on the streets.

Doc tried to learn to play the fiddle but didn’t have much success with it. Instead, he began to play some fiddle tunes on the guitar. Playing these fast melodies on a guitar was totally new – it eventually gave the guitar a new role in bands, and Doc’s playing style became what we today call flatpicking.

His career as a professional musician started as guitarist for a country swing band. During the folk boom in the early 1960s, he began performing at folk clubs and festivals singing hymns, oldtime ballads and country blues that he accompanied on guitar and banjo. This became the start of his solo career. In 1964, his son Merle joined him on stage and eventually started working full time with his father. They continued playing together until Merle’s premature death in 1985. Doc founded a music festival in his son’s memory, Merle Watson Memorial Festival, more commonly known as Merlefest.

Doc did not only flatpick but he also had a particular fingerpicking style, a variation of what is known as Travis picking after its inventor, Merle Travis. This picking style can be seen in his rendition of “Deep river blues”. Doc used the thumb to play the alternating bass strings as rhythm, and played treble notes to create the melody with another finger. Doc has said he practiced the thumb rhythm for 10 years before he learned the lead line.

Doc Watson died on the 29th of May 2012 at 89 years of age, after a short illness. His music and legacy lives on through flatpicking and the many guitar players who have come after him, inspired by Doc’s music. I hope to become one of them.

Myself and Doc Watson

When I first tried learning flatpicking in 2013, my major inspiration was Norman Blake, but Doc Watson was always there in the background as someone I loved listening to. Back then, Doc’s music seemed way too advanced for me to be something I could consider learning to play myself. However, his music has always remained on my playlists and it has continued to inspire me. His mountain folk songs are performed in a way that makes me feel like I’m sitting there on a front porch with Doc. There is something special about acoustic old-time folk and country music that gives me a sense of authenticity, of realness.

And there is something about Doc’s picking. The drive, feel, variety of his techniques – so complex and yet so simple. For me as an aspiring guitar player and flatpicker, it needs to be explored.

With the big influence Doc’s music has had in the acoustic guitar world, many musicians have performed and continue to perform his music. One player I’ve come to really appreciate lately is Billy Strings. He’s what I call just a young lad, and when I first heard him play I brushed him off as “one of those youngsters who just wants to show off playing super fast”. But the more I’ve heard him, the more I’ve realised that he’s much more than that. When I’ve looked for Doc Watson covers on YouTube, Billy Strings is one who really stands out. I highly recommend to look him up on YouTube and see some his concerts there. Here’s a sample of him playing the classic Black mountain rag.

Some links for you

How playing the guitar will help me play the concertina

Memories of Tony Rice and my exploration of bluegrass music

A trip to Bantry house and gardens

This website uses cookies to improve your experience while you navigate through the website. Out of these, the cookies that are categorized as necessary are stored on your browser as they are essential for the working of basic functionalities of the website. We also use third-party cookies that help us analyze and understand how you use this website. These cookies will be stored in your browser only with your consent. You also have the option to opt-out of these cookies. But opting out of some of these cookies may affect your browsing experience.
Necessary Always Enabled
Necessary cookies are absolutely essential for the website to function properly. These cookies ensure basic functionalities and security features of the website, anonymously.
Functional
Functional cookies help to perform certain functionalities like sharing the content of the website on social media platforms, collect feedbacks, and other third-party features.
Performance
Performance cookies are used to understand and analyze the key performance indexes of the website which helps in delivering a better user experience for the visitors.
Analytics
Analytical cookies are used to understand how visitors interact with the website. These cookies help provide information on metrics the number of visitors, bounce rate, traffic source, etc.
Advertisement
Advertisement cookies are used to provide visitors with relevant ads and marketing campaigns. These cookies track visitors across websites and collect information to provide customized ads.
Others
Other uncategorized cookies are those that are being analyzed and have not been classified into a category as yet.
SAVE & ACCEPT
Powered by